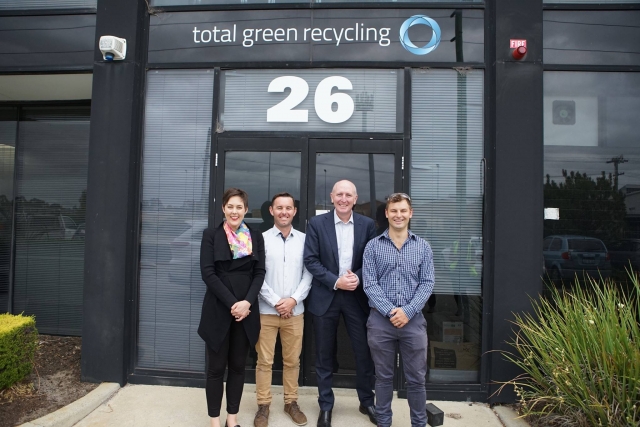 With minister, we had the honour of meeting a Senior Policy Advisor Dr Shaun Meredith and Cassie Rowe MLA Member for Belmont.

Michael kicked off the tour with a short presentation of the ten-year journey of our directors and brothers James & Michael Coghills’. From humble beginnings of collecting e-waste from the side of the road to renting a 3350 sq meter facility in Kewdale and employing 41 staff. You can read all about our successes here.

After our quick introduction, we discussed the proposed Waste Strategy 2030 and a letter of recommendations we put together for the minister’s office.

The three main points we made:

Lastly, we took Mr Stephen Dawson, Dr Shaun Merredith and MLA Cassie Rowe on the tour of our facility. (See pictures from the tour in our Facebook album.) They were all very impressed and proud to have a WA business recycling e-waste right here in Perth.

The Waste strategy 2030 has some ambitious targets to hit by 2030. E-waste is part of the waste stream that makes up these targets and recycling rates can be improved. A Federal scheme, collection network and processing network that are currently in place for e-waste recycling could be put in jeopardy without the co-operation of the state government. A failure of the National scheme in WA will likely impede on the state’s ability to meet the 2030 targets set in the strategy. The key actions identified in this document are aligned with the waste strategy. Some recommended actions have the required infrastructure in place to be implemented relatively seamlessly. Others can be implemented effectively through collaboration with other states that have already carried out these actions.

We have followed up with the minister’s office last week and hope to hear from them soon. To stay updated on our progress, don’t forget to sign up to our newsletter.